The beginning of Pinotage

Born from two seemingly mismatched parents, Pinotage has travelled a path fraught with circumstance over the last 100 years.

It started as an experiment by scientist Abraham Perold, a viticulture professor at Stellenbosch University, when he brushed a male Cinsaut flower against a pollen donor Pinot Noir then planted four of the seeds – presumably hoping to combine Pinot’s flavour with the easy-grow, disease-resistant nature of Cinsaut.

But he left the University shortly after and, if it wasn’t for an uncanny stroke of luck, the story of Pinotage would have ended there.

Several years later, cycling past Perold’s old, overgrown residence, a young lecturer happened upon the team sent by the university to clean the place up. He knew about the seedlings and arrived just in time to save them.

Replanted, the vines were seemingly forgotten again until a visit by Perold to his old stomping ground renewed his enthusiasm of 10 years previously. Once propagated, early commercial plantings were made at Myrtle Grove in Elsenberg, Kanonkop and Bellevue in the early 1940s.

Mastered in the cellar

In 1959, the new variety got its first taste of the limelight when a Bellevue Pinotage took the champion trophy at the Cape Wine Show. Two years later, it was a Pinotage from Kanonkop that took the top spot.

Since then, the grape has had its ups and downs. Tarnished by mass production and unskilled handling of the grapes, the varietal took a blow in 1976 when a troupe of British Wine Masters discredited Pinotage as ‘hot and horrible’ notable notes of ‘acetone’. 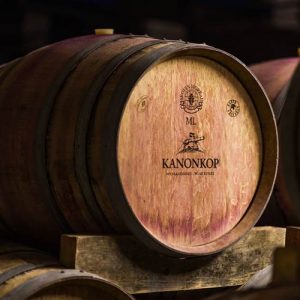 While many producers heard the death knell for Pinotage and uprooted their vines, a few winemakers kept their faith. They searched for ways to get the best of the variety, focussing their efforts in the cellar. Slowly but steadily, they made headway, with aged wines showing pleasant berry, banana and chocolate flavours. And so began a new trajectory.

In 1987, Kanonkop winemaker, Beyers Truter, won The Diner’s Club Winemaker of the Year for his Pinotage. Four years later, he was named International Winemaker of the Year by IWSC, showing the rest of the world that South African Pinotage was worth taking seriously. Then, in the early 90’s, another delegation of British Wine Masters even started singing its praises; “excellent wine and grape variety with tremendous potential” ; “Pinotage should be taken seriously”.

These days, Pinotage is still somewhat divisive. For every winemaker that extols the virtues of South Africa’s home-grown grape, there are as many that call it a second-rate varietal. What is clear is that almost a century after Professor Perold planted those four seeds, Pinotage has flourished. It’s the third most planted red variety in South Africa and, in the right hands, produces what many consider to be the best wine in the country.

What’s your take on Pinotage? If you’re not sure, try a bottle from Kanonkop. Winemaker Abrie Beeslar is a true master of the varietal and shows it at its best no matter the price point.